Free Quote
Home How Solar Panels Are Made
Category:

How Solar Panels Are Made 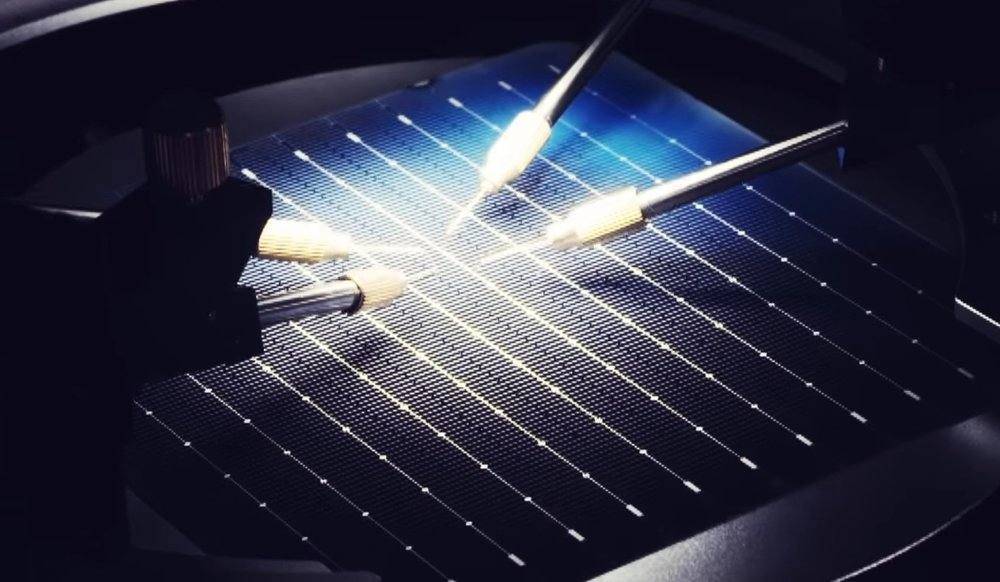 How Solar Panels Are Made

The majority of solar photovoltaic cells, or PV cell cosntruction are made using silicon crystalline wafers. The wafers can be one of two main types, monocrystalline (mono), or polycrystalline (poly) also known as multi-crystalline. The most efficient type is monocrystalline which is manufactured using the well-known Czochralski process. However, more recently heterojunction or HJT cells have become more popular due to the increased efficiency and improved high-temperature performance as explained below.

What Is PV Cell Construction?

Silicon is first extracted from a specific type of sand known as silica sand, or silicon dioxide, which is usually made from crushed quartz rock.

At this stage, we have a form of pure polycrystalline silicon which can be doped with trace amounts of either boron or phosphorous to become either P-type or N-type polysilicon. To make polycrystalline wafers, the doped silicon is melted and cast into large rectangular blocks before being thinly sliced using a diamond wire cutter to produce the polycrystalline or multi-crystalline wafers. The wafers can then be coated with a very thin layer of either P or N-type to form the PN-junction (photovoltaic cell).

To manufacture the more efficient monocrystalline wafers, the doped silicon can be drawn into a single solid crystal ingot using the Czochralski process. This process involves melting the polycrystalline silicon under high pressure and temperature to slowly grow a single monocrystalline crystal known as an ingot.

All silicon crystalline solar cells are made using a very thin wafer of base silicon with the two main types being P-type and N-type. These are made when the silicon is ‘doped’ with specific chemical elements to create a positive (p-type) or negative (n-type) charge.

The chemical elements used for doping are either phosphorous which creates a positive charge and boron which results in a negative charge. Depending on the type of cell architecture, either N-type or P-type doped silicon is used as the base or ‘substrate’ of the cell. The vast majority of both mono and multi-crystalline cells used today use a P-type substrate that has a base of boron-doped silicon. Until recently, only a few premium manufacturers such as LG, Panasonic, SunPower, and REC used the more efficient N-type silicon wafers although many more companies are now starting to develop N-type cells as the cost is declining. N-type silicon cells are more expensive to produce but offer higher performance and a lower rate of LID or light induced degradation, plus an improved temperature coefficient.

As explained above, the P-type and N-type silicon are brought together and form what’s known as a p-n junction. The junction creates an electric field which enables the flow of electrons when solar radiation passes through the cell. The photovoltaic effect is when light photons (energy) free the electrons from the silicon creating an electric current.

Due to the very nature and material composition, N-type cells offer higher performance through having a greater tolerance to impurities and lower defects which increases overall efficiency. In addition, n-type cells have greater temperature tolerance compared to both mono and multi P-type cells. More importantly, n-type cells do not suffer from the issues of LID (light-induced degradation) due to the boron-oxygen defects which are a common issue with p-type cells doped with Boron.

N-type cell construction is more expensive as it uses what’s known as a boron diffusion process to add the thin p-type ’emitter’ layer. This diffusion process is more complex and requires higher temperatures compared to the p-type cell phosphorous diffusion process. Although N-type cells are more expensive to manufacture, the base n-type silicon is of a much higher purity which enables higher efficiency, lower losses, and much lower degradation over time, this results in higher generation and performance which also improves payback and generally outweighs the additional upfront cost over the life of the panel.

Heterojunction or HJT solar cells generally use a base of high-purity N-type crystalline silicon with additional thin-film layers of amorphous silicon on either side of the cell forming what is known as the heterojunction. The different photovoltaic materials help absorb more light photons and reduce the recombination losses thus boosting overall cell efficiency. Current HJT panels on the market such as the REC Alpha series, achieve panel efficiencies as high as 21.9%.

TOPCon stands for Tunnel Oxide Passivated Contact and refers to a unique rear side passivation technique first developed by the German solar research institution Fraunhofer ISE back in 2014. After five years of development, TOPCon Technology has moved into large-scale production and is expected to slowly replace the industry-standard PERC cell technology over the next few years. Topcon cell architecture essentially helps reduce what is known as the recombination losses in the cell which in turn boosts cell efficiency. Due to a complex number of factors, there are several losses within a solar cell that cause electrons to recombine back into the cell without forming an electric current. TOPCon technology not only helps to reduce this recombination loss but being a full-area rear contact it also aids current flow within the cell structure and can increase cell efficiency above 25%. Note, solar panel efficiency is always lower than the cell efficiency as it takes into account unused sections of the panel and the additional losses through all the cells, busbars and collectors.

While TOPCon technology is generally used in conjunction with N-type substrates, it can also work effectively with more common P-type substrates to boost cell efficiency up to 24%.

How Are Solar Panels Made?

Here in our detailed article, we describe how solar panels are manufactured and recycled. Solar panels are made using six main components in advanced manufacturing facilities using precise optical sensors to position each component along with specialized testing and quality control equipment.