What is a tax credit?

A tax credit is a dollar-for-dollar reduction in the amount of income tax you would otherwise owe. For example, claiming a $1,000 federal tax credit reduces your federal income taxes due by $1,000. The federal tax credit is sometimes referred to as an Investment Tax Credit, or ITC, though is different from the ITC offered to businesses that own solar systems.

What is the federal solar tax credit?

The federal residential solar energy credit is a tax credit that can be claimed on federal income taxes for a percentage of the cost of a solar photovoltaic (PV) system. (Other types of renewable energy are also eligible for similar credits but are beyond the scope of this guidance.)

The system must be placed in service during the tax year and generate electricity for a home located in the United States. There is no bright-line test from the IRS on what constitutes “placed in service,” but the IRS has equated it with completed installation.

There is no maximum amount that can be claimed.

Am I eligible to claim the federal solar tax credit? 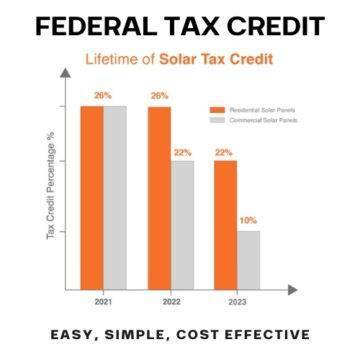 You might be eligible for this tax credit if you meet all of the following criteria:

What expenses are included?

The following expenses are included:

How do other incentives I receive affect the federal tax credit?

For current information on incentives, including incentive-specific contact information, visit the Database of State Incentives for Renewables and Efficiency website.

REBATE FROM MY ELECTRIC UTILITY TO INSTALL SOLAR

Under most circumstances, subsidies provided by your utility to you to install a solar PV system are excluded from income taxes through an exemption in federal law. When this is the case, the utility rebate for installing solar is subtracted from your system costs before you calculate your tax credit. For example, if your solar PV system was installed before December 31, 2022, cost \$18,000, and your utility gave you a one-time rebate of \$1,000 for installing the system, your tax credit would be calculated as follows:

When your utility, or other buyer, gives you cash or an incentive in exchange for renewable energy certificates or other environmental attributes of the electricity generated (either upfront or over time), the payment likely will be considered taxable income. If that is the case, the payment will increase your gross income, but it will not reduce the federal solar tax credit.

REBATE FROM MY STATE GOVERNMENT

For example, the net percentage reduction for a homeowner in New York who claims both the 25% state tax credit and the 26% federal tax credit for an $18,000 system is calculated as follows, assuming a federal income tax rate of 22%:

Note that because reducing state income taxes increases federal income taxes paid, the two tax credits are not additive (i.e., not 25% + 26% = 51%). For an $18,000 system, the total cost reduction in this example would be: